Tower defense game... but in reverse!

This is my first time participating in the Weekly Game Jam (Week 62). The theme was "Play the Villain", so I made a tower defense game but where you play as the enemies.

Click on a bug on the right side of the screen, and then on a blue spawn point to deploy it.

Destroy the hive before time runs out to win.

Design, Art, and Programming by kypello

Made using Unity and artwork made using Pixelmator

some post-Jam comments from the composer :)

I think we can sum it up by saying that there's a lot of mismatch for both of us - I think my music didnt quite fit that well and also the different sections and sounds dont quite make sense together yet. Similarly I think the art assets are awesome and probably my favourite part about the game as a whole, but theres something about the 2d/3d combination that feels a bit weird. Maybe if it had a kind of pop-up book animation style, like the towers lifting up from the 'page', that could bring the style to life. The strategy and balancing of the gameplay would need work if we wanted to continue with it, but the core mechanics are solid and it looks like the groundwork is all there to potentially expand the game and make it really fun.

I would have liked to make "cutscene" music of some kind for the little bit at the start, and maybe menu music if we got there, as well as maybe contributing with some improved sound effects - though the current ones are cool and I'm a fan of the humorous 'homemade' style, which is often my go-to as well.

Overall, i think this reflects the opening stages of a promising game, with some lacking and some impressive elements to it.

I love the art and sounds, But the game wasn't really challenging because there are only 2 points. Moybe if you could put more levels with diferent enemy building and more points it woulds be more fun.

There actually are four spawn points, but the two in the back left are very easy to miss and kind of hard to click on

Wow, i didn't even notice those

I liked the bugs, the clicking was not always smooth, seemed I would click on a bug and it wouldn't select.  The hive also went down very easily.  Also, basically it just became click often, there was not much strategy, like in a normal tower defense game.  The concept is good and probably just needs some expanding, not sure if you want to make a post Jam version or not. 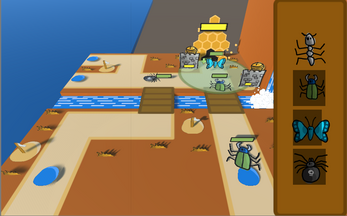 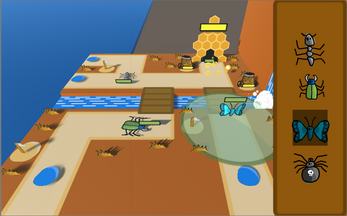 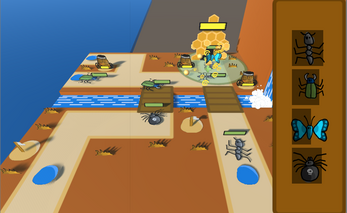